Meet STEVE, not your neighbor, but the recently-discovered celestial phenomenon

If you're a devout observer of the night skies, you may have seen it already. But you may not have known you have seen it.

which has some similarities with the aurora borealis, but is distinct.

STEVE's narrow ribbon of light, to the naked eye, looks strikingly similar to aurora. However, there are distinct differences. First, its pinkish mauve color is not aurora-like. In addition, the phenomenon is often associated with “picket fence” emissions, which look like green columns of light passing through the ribbons at lower altitudes. Lastly, STEVE appears in areas farther south than auroral lights typically do.

“It still glows in the sky, it still glows up in the same region the aurora happens so it looks like aurora but it's not the same mechanism as aurora. And in a way that's the exciting part of it because it's a different phenomenon,” said Donald Hampton, research associate professor at the UAF Geophysical Institute.

How did it get its name? Not from your neighbor. STEVE is actually a cheeky acronym coined by scientists which stands for ‘strong thermal emission velocity enhancement.’

Hampton and his colleagues designed and built a spectrograph at the UAF Geophysical Institute that was an essential part of a project, led by the University of Calgary researcher D.M. Gillies, to examine the light from the phenomenon and identify what kind of emissions it gives and in what patterns and wavelengths.

[Their research can be found here]

Here is a great explainer

from NASA about STEVE.

So what exactly is STEVE? Why does it happen? And when is the best time to see it (him?)?

Channel 2 reached out to NASA Postdoctoral Program Fellow Bea Gallardo-Lacourt who has worked on recent studies of STEVE.

Below is Q & A with Gallardo-Lacourt:

What is Steve?
Steve is a narrow ribbon or mauve-white light in the night sky. Steve occurs in a region where we do not expect this type of bright structures to occur, it is located in the sub-auroral region, at lower latitudes than the auroral oval (or southward of the auroral oval in the northern hemisphere -opposite in the southern hemisphere). Sometimes, STEVE (the purplish arc) is observed together with green finger-like structures that we call picket fence. Steve extends in longitude, from east to west, for thousands of miles, but it is extremely narrow in latitude (just tens of miles). STEVE is observed together with an extremely fast, narrow stream of hot ions (which are around 6,000 degrees Kelvin. To have an idea, this is the temperature at the Sun’s surface). These fast-moving ions have been observed before and we call them sub-auroral ion drifts (SAIDs). We have found that STEVE is associated with extreme SAIDs (faster than regular).
The conjunction (highlighted in the pink region) of the STEVE optical emission with a pronounced SAID signature at satellite altitudes.
How does it happen?
According to the reports from the photographers and from or optical scientific images, we first observe an increase in auroral activity within the auroral oval, a phenomenon called substorm (this is when the aurora becomes more active, widespread and intense). About an hour after this activity starts, STEVE is observed southward of the auroral oval. STEVE lasts for about an hour and then fades away.
When did we first find out about Steve?
Auroral photographers have been observing and documenting STEVE for decades; however, the scientific community first became aware of it on January 2016 when the photographers showed photographs of STEVE to Dr. Liz MacDonald (NASA) and Dr. Eric Donovan (University of Calgary). After that, a group of us started working towards the first scientific publication on STEVE that was released in Science Advances on March 2018.
What does the current research of STEVE show?
The recent research shows that STEVE is not produced by the same mechanism as the aurora. The aurora is produced by particles from the near-earth space environment that precipitate into earth’s upper atmosphere. Satellite data have shown us that at the time of STEVE there is no evidence of particle precipitation (electrons and ions). In addition, the spectrum of STEVE is produced in a broadband of wavelengths, unlike the aurora, which is more discrete. For this reason, STEVE appears as a mauve-white emission. We have also gathered information about the green picket fence. Satellite data have showed us that the picket fence is produced by precipitating electrons that energize neutrals in the atmosphere (atomic oxygen) that later emits light. In addition, the spectrum of the picket fence is discrete, showing a single peak of emission in the green wavelength (557 nanometers). All this information tells us that the picket fence is produced by the same process as the aurora. In other words, the picket fence is aurora, unlike STEVE.
Why do we study things like Steve and northern lights in general?
The aurora and the optical phenomena happening in the ionosphere (like STEVE) are great indicators of space weather, which are the conditions on the Sun and in the solar wind, magnetosphere, ionosphere and thermosphere that can influence the performance and reliability of space-borne and ground-based technological systems and can affect human life or health (This definition comes from the NASA Solar and heliospheric observatory) Nowadays, societies rely on the ionosphere and the near-earth space environment for communications, defense and other applications. The failure to understand the near-earth space environment could lead to incredible societal and economic loses.
What does the future hold as far as research on STEVE and northern lights?
Although we have come a long way from the beginning of the space exploration era, there are still several unanswered questions. For STEVE, for example, we need to know how the unusually high temperatures observed during STEVE are produced; how exactly the magnetosphere is injecting energy into the ionosphere for STEVE to form; why, how and when the picket fence is observed with respect of STEVE – how are these two processes associated? What is the chemistry in the ionosphere (what elements) playing a role in the formation of the purple observed in STEVE? For the aurora, one of the biggest unanswered questions is how and where precipitating particles (particularly electrons) get accelerated in the magnetosphere. We are still evaluating several theories.
Now a big question, when can we see Steve?

Lacourt says “We published a statistical study of STEVE and found that STEVE events are more frequently observed closer to equinoxes, with maximums in the months of April and September. Since STEVE is a sub-auroral phenomenon, it is observed at lower latitudes than the aurora in the night sky.”

Basically, because STEVE is typically south of the main aurora storm, people in southern Alaska have a better chance of seeing it than those in the interior and north. That's the opposite as the regular aurora borealis. 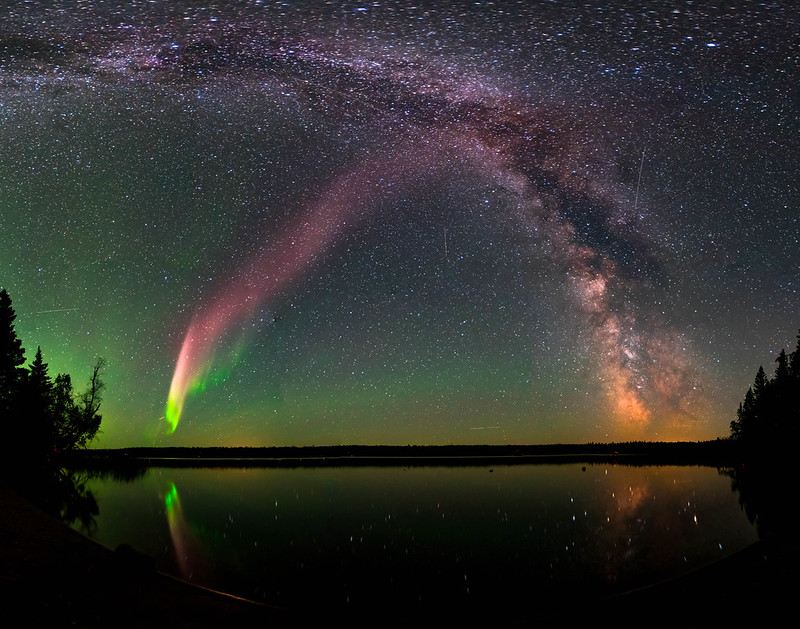 Research: New Kind of Aurora Is not an Aurora at All
Research: Scientists Discover What Powers Celestial Phenomenon STEVE

Palmer man sentenced to 99 years for 2016 murder of schoolmate

Mom shares her secrets to saving during back-to-school shopping

Mom shares her secrets to saving during back-to-school shopping